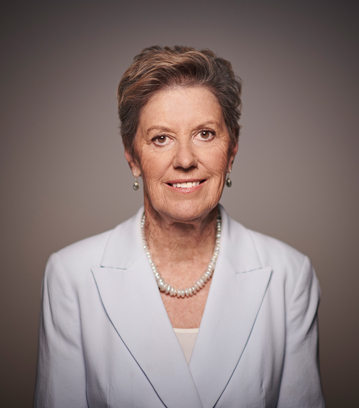 Former Chief Justice of the Family Court of Australia

The Honourable Diana Bryant AO QC is a former Chief Justice of the Family Court of Australia. She has practiced in family law since 1977 and retired as Chief Justice on 12 October 2017 reaching the constitutional retirement age of 70. Since, she has continued her deep interest in family law, particularly regarding matters affecting children and families.

Ms Bryant started her career as a solicitor, briefly practicing in Melbourne and London before moving to Perth in 1976. She was a Partner at Phillips Fox from 1977 to 1990, where she practiced as a solicitor and counsel specialising in family law. Ms Bryant practiced at the Victorian Bar for 10 years where she specialised in family law and de facto property disputes, particularly at the appellate level. She was appointed a Queen’s Counsel in 1997, Melbourne.

Since her retirement she has been Judge in Residence at Melbourne law School in 2018 and 2019.She is currently the President of the Graduate Union of the University of Melbourne. She has been chairing an international Working Group at the Hague Conference on Private International Law developing a Guide to Good Practice on the ‘grave risk of harm’ exception to the Child Abduction Convention. She is Chair of the National Centre Against Bullying as well as the Chair of World Congress on Family Law and Children’s rights Inc.. Ms Bryant also heads the Family Violence Committee for the National Judicial College of Australia and is a presenter in their workshops.